I don't think I've become insufferable now that I'm famous.  But I guess you'd have to be the judge of that.  I find myself to be, you know, charming and very welcoming of my public.  If anyone ever asked for my autograph, say, or a selfie with me, well, I'd be most accommodating.  I think neither has happened yet because people can be so intimidated by famous people.  Hey, we're just like you!  Don't be scared!  Come on over and say hello!  Introduce your grandchildren to me.  I'm happy to pat them on their little heads and give them a moment to remember.

OK.  You may be wondering if I've totally gone bonkers.  Maybe somehow you were so absorbed in your own pedestrian life that you missed my big videographic debut.  Well, lookie here:  http://www.yogacirclestudio.com  (Who Does Yoga?)

Yes.  That little ditty has been up on the Yoga Circle website for over a week now and I'm sure the post office is storing the fan mail until they can find a truck large enough to deliver it.   I will, of course, answer each letter personally and include an autographed photo (framable).

When Karen asked if I'd be willing to be interviewed, I said yes, because promoting this blog and the studio are two things I love to do.  Besides, it had been years and years since my glory days of being hounded by the press when I headed up a local activist group and found myself being interviewed on the TV news dozens of times.  The issues were important; the TV stuff was fun!  I am one of those introverts who can perform.  Put a mic in my face and some "other" me jumps  into action.  You always hear about performers who say they are introverts and you want not to believe it, but it can be true.  I've emceed, done performance poetry, led services at a church I used to attend, made speeches.  Very little stage fright.  It's weird.

The experience with this interview was fun too.   The studio was empty.  The director tested for where to set up, what the background would look like, got the shot framed, the sound checked and then "action!"  He asked me a series of questions (none known to me previously) and I answered with animation and articulateness.  I was in the flow!  I could tell I was hitting it out of the park!  When we finished I was sort of euphoric.  Then he said, "I'd like to do it again while other students are coming in."

"WHAT?  I nailed my first take!  I can't duplicate that brilliant performance!", I thought.  I might have mumbled a less startled protest that I thought maybe perhaps we had the footage we needed.  But nope.  A director has his vision.  So I went all Meryl Streep inside and told myself, "You can do this.  Multiple takes?  Sure.  Be a professional and do it again."

So we did.  Some of the questions were the same.  Some different.  Editing cut the whole interview down to just over 3 minutes (the attention span of the average viewer, I guess) and I'm sure some of my best work ended up on the cutting room floor (or wherever digital editing goes), which is the lament of every performer.  But I'm pleased with the end result, with one exception:

When I was asked what posts I like best, I went on and on about the ones where I am klutzy.  I do like those, for the reasons stated, but I wish I'd also mentioned the ones where I get a big "a-ha" on the mat.  Some learning happens that moves me emotionally.  I've actually written about those moments far more often than the klutzy moves I do.  And for me, they are the reason I want everyone to practice yoga.  Yes, for all the physical benefits, but also (and perhaps more) for the benefit to our spirits.

Maybe I can work this teaching into my NEXT interview, because, "Mr. DeMille...I'm ready for my close-up."

P.S.  "I'd like to thank my producer, Karen Guzak, and my director, Warner Blake, without whom I never would have won this award.  I'd also like to thank everyone who has ever read this blog.  You are the wings beneath my Pigeon Pose."  (Just practicing my speech.) ©

Photo Credit: pixabay.com
Posted by donnajurene at 8:39 AM 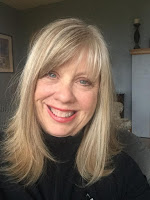 Thanks for stopping by the blog. So glad you are here! I post a few times a month, so check back often! Click a reaction box or leave a comment at the end of each post. Join the conversation. We are all in this together! Namaste from your sometimes klutzy neighbor on the mat.

This blog is copyrighted and may not be reproduced without written permission from the author.